In February 2016, one of my Maker friends in Jakarta, Indonesia pointed me to an offer of an all-in-one PC too hard to pass up. It was a GULEEK i8 with Intel Quadcore Atom processor (Baytrail), 2 GB Ram, 16Gb ssd, built-in battery, 2 USB 2.0 Ports, micro sd-card reader, Windows 8.1 pre-installed. The whole package sold for incredibly low $70 a piece.

I was not so sure that Windows 8 would perform well on this, so I did a little Internet research and found a couple of people successfully running Linuxes on these machines. I thought these might make great powerful replacements for some of my Raspberry Pis. Especially, if I would not need graphics and ran them headless -- what did I know what I asked for there - see below.

We purchased 3 pieces of this, they arrived two weeks later. My friend tried to upgrade one of them to Windows 10, but had trouble due to space limitations. I installed Ubuntu on the other two (after making a backup of the disk to be able to go back to Windows), having only to replace the 64 UEFI boot loader with a 32 bit one. However on one of the two remaining GULEEKs the Display started to fail - it was just not possible to get an HDMI-out signal anymore. There are several instances in the net where this is described (search for guleek i8 no display), but no consistent solutions. The problems also seem to be not Linux specific, so it seemed to happen in Windows too (I restored my windows image, but to no effect - not sure if it really booted up again though).

Usually it is suggested to try to connect the failing GULEEK to different screens, let the internal battery drain, and connect another day to check again. And I have to admit on some random occasions my display came back, but it was lost very quickly again soon after. So, I was forced to find a solution to drive this device headless.

Fortunately I had a version (with a blue and not a red power led) which seemed to be stable to use as a reference for typing things blindly.

Recently I lost - due to an update to Ubuntu 17.04 - access to this one machine, so I had to boot it from a rescue image. But how can you select to boot from a rescue image if you cannot get any display output on such a machine? The solution was using a default USB-Ethernet adapter, typing some things blindly, and booting from an arch-linux install cd.

To boot from an external device, try to do the following:

Another option is to use a 32-bit version of the system rescue CD, this could even allow you to gain access just via serial USB.

After you have installed a base system, I highly suggest to enable at least one tty to login via serial, this helps if something with the network goes wrong. This is described here: https://wiki.archlinux.org/index.php/working_with_the_serial_console#Without_GRUB2.2C_systemd_only

Careful, you really have to try to connect with 9600 or 38400 baud. If you want to connect with 115200 baud, you have to build your own systemd service file as described here: http://0pointer.de/blog/projects/serial-console.html

If you happen to have a real FTDI serial USB adapter, you can even enable serial at the EFI-prompt. For this you need the following 32-bit efi drivers:

Create a file startup.nsh with approximately the following content:

Copy these to the root and into an efidrv directory on the ESP partition and use efibootmgr to select with the -n option a one time boot to test-boot into the built-in shell. 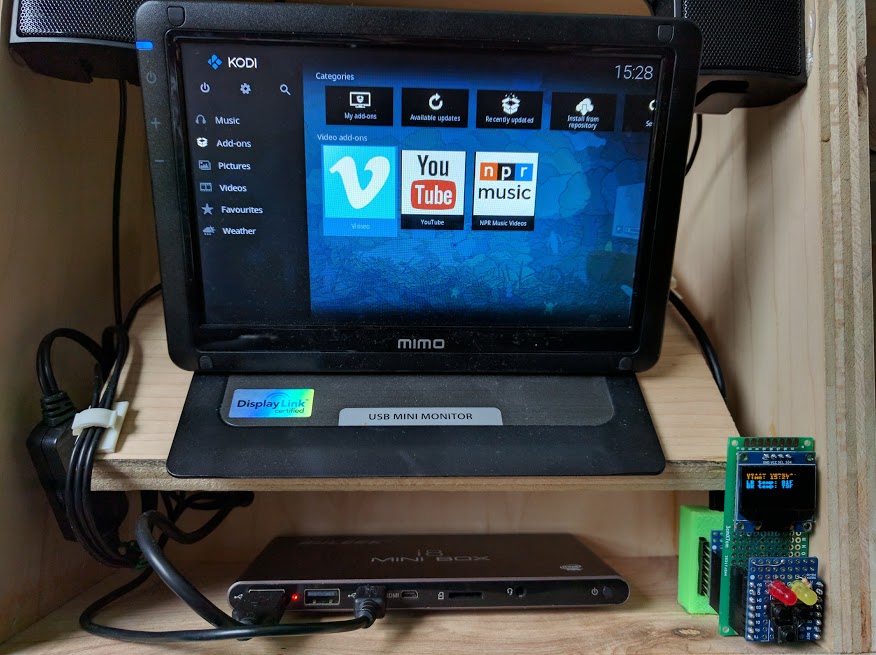 As you see in the picture, I attached to my now headlessly installed machine a Display Link driven USB display (an old 7 inch MiMo Monitor). It basically just works, but might have to be enabled via xrandr or arandr (to switch away from the broken intel display output). Something like this should do the trick:

You can use any old monitor with the adapter I linked below.

Inspite of these hassles, I still think these machines are still a tremendous value for money. If you are interested in picking one up (only seeing a slightly more expensive successor offered at the moment) and supporting me, please click on the affiliate links below.

Let me know if you want to read more like this and share your ideas in the comments.